“And what about the mountain dogs who were so good in the yards, they could even do up the gates?

‘You’ve heard the yarn, haven’t you?’ asked Lanky Couldron ‘about the bloke who reckoned his dog was so smart that he could pen a mob of sheep, push the hurdle gate shut himself and even jump up and put in the little wooden peg to keep it shut? The only problem was that those little pegs had a habit of fallin’ out and if that happened the bloody sheep’d get out.’
Some other bloke, who’d been listening all night without saying much, suddenly snorted with contempt.

‘Piss weak. Don’cha know anything? Round our way, we train dogs properly. Once they get the sheep in and the gate shut, they piddle on the little pegs, wait for the moisture to swell the wood, then they put the bloody things in. That way, they never bloody well fall out!”

A thoroughly entertaining compilation of over 300 stories capturing the amazing spirit of the many dogs still working on the farms of this great country. These tough, loyal and incredibly smart workaholics have been assisting ‘the boss’ since the early farmers first occupied the land and started they hard work supplying food to the town folks.

Heartwarming, funny, sad, you get to read all sorts of wonderful stories about the strong bond that develops between the tough country man and his equally tough dog and the unbelievable capabilities of the dogs that are often given to their owners as pups by neighbours from a litter that resulted from some cross breeding amongst the local farm dogs.  Desexing obviously wasn’t a big thing back in the old days.

Reading about the fulfilling life of the working dog that is doing what it does best: rounding up sheep or kettle and occasionally the chooks too, running to its heart’s content all day long, hunting fox and the odd kangaroo, I can’t help but feel a bit sorry for city dogs, especially the working breeds, which are cooped up in small backyards and between walls on end, not being able to live the life they were originally bred for. (Mental note to self: take Chester, my cocker spaniel, for even bigger walks from now on.)

A Heritage of Country Genes by Angela Goode, one of the authors of the compilation, gives a prime example of this. Lucy, her border collie, forced to live in the city for eleven years gets into all sorts of mischief in the attempt to shake her boredom and frustration of not being able to be the sheep dog she was born to be. Instead of guarding the house, after Angela leaves home for work, Lucy opens the gate and sets up camp at the local shopping centre in between the butcher’s and the bakery where she would receive yummy treats. Another time she manages to find Angela’s work place by tracking the scent of her bicycle tracks through numerous sets of traffic lights and bounces into a meeting. Once Lucy is out in the country, after Angela marries “the boss”, Lucy is finally in her element.

I also loved the story of Trixie, the border collie, who just loved working. She didn’t even need any training, she was a natural. From the age of three months she was brilliant at her “job”.

“…she was good at everything. In fact she was a bit of a show-off. At shearing time, when all the sheep were penned up and she didn’t have anything to do, she would come down to the house and work on the white rooster. Whether, because of his colour, she thought he needed shearing too, no-one knows. But she would separate him from the hens and nose him right up to the shearing shed, then inside the door – much to his displeasure. The old rooster would be cackling with annoyance and the shearers and everyone in the shed would laugh.” 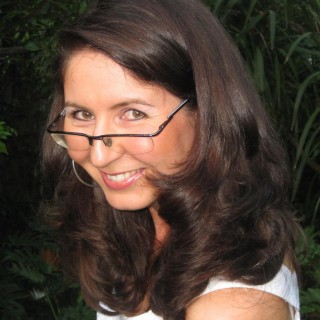